At a news conference Thursday morning, Augustana was announced as the home for a new central repository of workforce, economic vitality, social services, education and quality-of-life data for the Sioux Falls Metropolitan Statistical Area (MSA), a geographical, economic and social area defined for U.S. Census purposes.

About the Data Warehouse

Last year, with leadership from Sioux Falls Thrive, representatives from Augustana, city departments, the Sioux Falls School District and area nonprofits formed a group to analyze how data is reported, tracked and used.

The group found that each day, employees of local government, nonprofit and commercial entities charged with maintaining public information websites, reporting news, writing grant proposals and developing marketing and business plans spent countless hours making phone inquiries and searching the internet to pinpoint demographic and socio-economic data about the Sioux Falls MSA. The result was lost productivity and, because the data wasn't centralized, a risk of inaccuracy.

“It was time to ... look for a solution that could meet all of those needs," said Evan Nolte, Augustana Class of '65 and president of Sioux Falls Thrive.

After identifying its design standards, the group endorsed development of the Augustana University Data Warehouse. The warehouse will hold two data hubs: a proprietary hub used for warehouse partners’ research projects and “OpenSiouxFalls,” a central repository of community indicators reflective of the workforce, economic vitality, social services, education, and quality of life of the Sioux Falls MSA.

“The OpenSiouxFalls site is a big win for the public,” Nolte said. “It puts Sioux Falls in alignment with the 'open gov' movement and will give free, convenient access to important community information.”

"Augustana is working every day to help build a better tomorrow here and around the globe. This project will help our community partners do the same," said Dr. Pam Homan '81, executive director of the Center for Innovation and Entrepreneurship. "In addition, this endeavor will give way to unmatched opportunities to engage in valuable, real-world research for our faculty and students."

Beta testing of Phase I of the project is planned for later this summer. 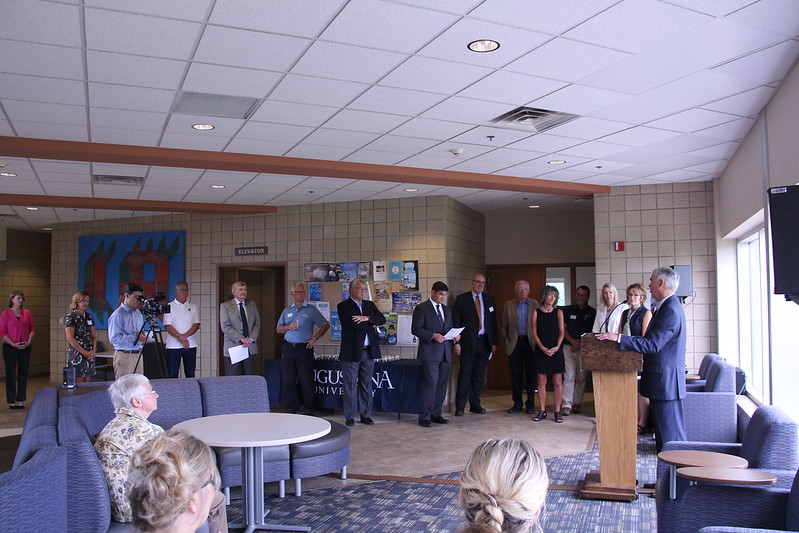 To learn more, contact the Augustana University Center for Innovation and Entrepreneurship.
innovation@augie.edu