A Night for Science

Excitement for the Boe Forum has been brewing since last October, when Tyson was first announced as the event's speaker.

The event was free, but tickets were required. Tickets went on sale in November and sold out in just over 10 minutes — an all-time record for Augustana. By Monday afternoon, a line of so-excited-they-were-almost-giddy ticket holders stretched out of the Elmen Center, through the parking lot and around the corner. It was a night that promised to be cosmically awesome for science-lovers of all ages — from grade-schoolers, to college students, 30-,40- and 50-somethings, retirees and more.

And Tyson did not disappoint.

He had too many great quotes to count. We've highlighted a few here:

ON SETTING THE STAGE:

"Think of this not as a lecture … we’re just going to hang out for a little while."

ON SPEAKING AT AUGUSTANA:

"They wanted me to speak for like 30 minutes. I said: 'No. How often am I in South Dakota? And the universe is vast.'"

"Science as a way of knowing and I will offer cultural, social, and political observations on this."

"You will never find legions of scientists waging war on other scientists. It won’t happen. They’ll get together at the battle line and they’ll say: 'Well, show me your data. I think that looks pretty good. I agree. Let’s go have a beer.' End of war."

"I was implicated in the demotion of Pluto."

"No matter what anyone tells you – even biologists – I want to make it clear to you that Earth wants to kill you."

"Do you realize that over 90 percent all species there ever was are now extinct? Is that a planet that loves life?"

ON SCIENCE AND THE HUMAN EGO:

"Generally, scientific discoveries are bad for your ego. Especially in my field. You learn how small and insignificant you really are … once you learn how big and vast and timeless the universe actually is."

"In these stars — in some of them — heavy elements are cooked … they explode, scattering their enrichment across the galaxy, out of which you can make planets and life. So it’s not simply that you are in this universe. The universe is in us."

"So when you look up, are you saying 'I’m small and insignificant' because the universe is vast? Or are you saying 'I am a participant in this universe, in the great unfolding of cosmic events and I am made of the stuff of the stars'? We are not only figuratively, but literally, stars." 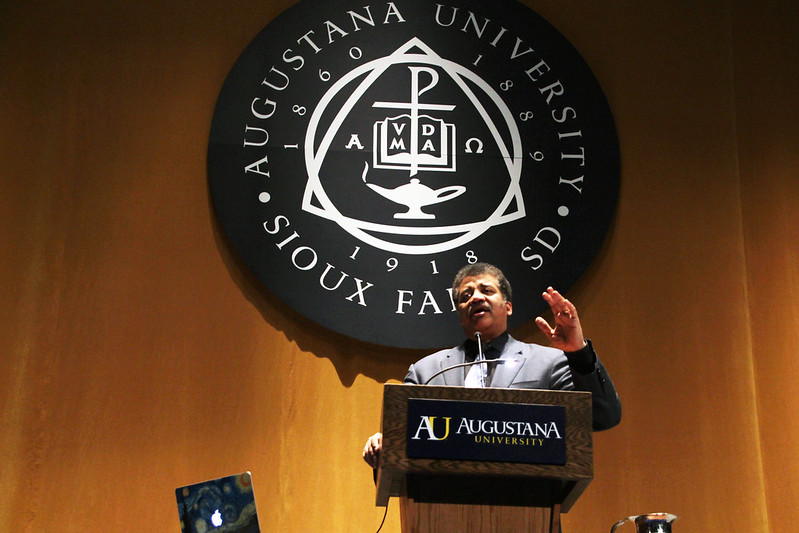 Ahead of the Boe Forum, Tyson spent time Monday afternoon visiting with journalism students from Augustana and area high schools.

While talking with students, Tyson said that as an educator, he tries to avoid taking positions on issues.

"I don't debate — I highlight causes and effects," he said, stressing the need for everyone to build a deep understanding of "what science is and how and why it works."

He also discussed the intersections of art and science.

"Technology affects the moving frontier of art — they are connected," he said.