See photos from the event.

Rob and Angie Oliver have served Augustana for more than 25 years, first as volunteers and then, beginning in 2006, as president and first lady. Last fall, they announced their plans to retire, effective July 31.

The couple, who have been married for nearly 40 years, were described by their nominators as “a great team.”

“In good times and those of great challenge, Rob and Angie have remained positive, encouraging, caring and thoughtful. They have always put people first. Who could possibly count the number of events, performances, competitions, dinners, receptions they have attended and/or hosted? They seem to be everywhere, all the time, supporting every facet of this institution … they have been incredible listeners, mentors, role models, servants and leaders,” one nominator wrote.

“They have given us their time, their talents, their treasure and, most certainly, their hearts. Their Augie Pride shines brightest of all.”

“We have been truly blessed to have Rob and Angie as part of the University community,” another nominator wrote.

“Rob’s campus development accomplishments have been well-documented; the advancements he led in curricular development have been significant; and during his 11-year tenure, he was responsible for raising over $180 million in philanthropic support,” another nominator wrote. “All the while he was leading, presiding, presenting, sharing, teaching and encouraging, his wife, Angie, was steadfastly always by his side. Rob could not have accomplished all he did without Angie. They are indeed a great team.”

Frederick was described by her nominators as the ultimate puzzle solver who is also a caring, compassionate and empathetic leader.

“Deb sees us not as simply coworkers, but as friends. She is a deeply caring person who … listens, shares and encourages those around her in all aspects of life, not just as it relates to what we do here at Augie. Deb has mentored many … as technology becomes a bigger and bigger piece of our jobs,” one nominator wrote. “She coordinates with multiple offices and understands the workings of the University at a depth most never see. She needs this depth of knowledge to be able to program the system to do what is needed.”

“Deb is interested in not only assisting us with technology needs, but in teaching us,” another nominator wrote.

“She is interested in empowering everyone to work as independently as possible as this makes each of us more efficient and effective.”

“Deb is the ultimate puzzle solver,” another nominator wrote. “She understands the complexity of how data entered correlates to data extracted. She is committed to ensuring the highest integrity and accuracy for both.”

The event also honored members of the Augustana community who will retire after this academic year: 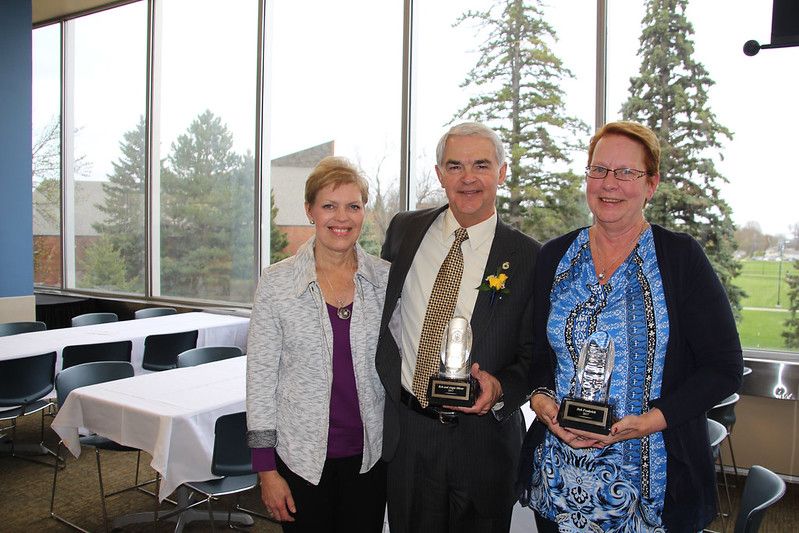